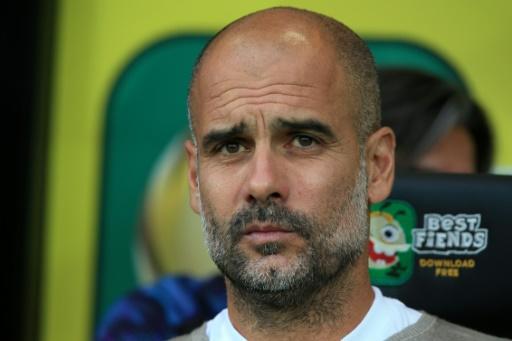 Manchester City boss Pep Guardiola did not seem too concerned by his side’s shock defeat at Norwich City on Saturday.

The Premier League champions were deservedly beaten 3-2 at Carrow Road as the injury-hit Canaries produced a stunning display to pull off a famous victory.

Kenny McLean headed the hosts in front from a corner before Todd Cantwell doubled the lead to put the Premier League new boys in dreamland.

Sergio Aguero pulled one back on the stroke of half-time but it didn’t spark the comeback expected from City, as Norwich pressed on and extended their two-goal advantage through Teemu Pukki’s sixth of the season soon after the restart – gifted to him after Nicolas Otamendi dallied in possession before being robbed of the ball on the edge of his own box.

Rodrigo arrowed in a late consolation but the defeat leaves Guardiola’s side five points behind title rivals and league leaders Liverpool, who are yet to drop any points.

Despite the setback, Guardiola believes it would be premature to consider it pivotal in the chase for a third consecutive league title.

“Five points (behind Liverpool) is five points – but we are in September,” he said.

“What are we supposed to do? Say ‘it’s September and congratulations to Liverpool, you are champions?’

“Not for one second am I going to doubt my players.”